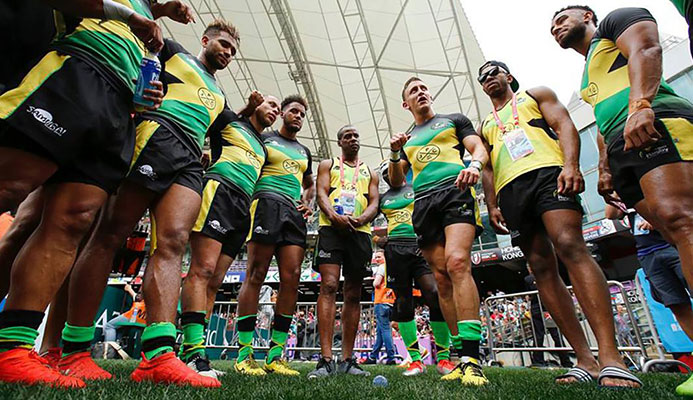 (CNN) It's not a nation normally associated with rugby, but then Jamaica wasn't known for bobsled before the 1988 Winter Olympics.

Jamaica's rugby sevens team is blazing a trail on the international circuit and has qualified for its first World Cup this summer.

Comparisons with the pioneering bobsledders -- and the subsequent movie "Cool Runnings" -- are obvious and Jamaica's captain Conan Osborne sees them as a blessing rather than a cliche.

"I quite like the 'Cool Runnings on Grass' thing and I'll tell you why," says Osborne.

"First of all it's a great brand.

Like the bobsledders in Calgary, and now a Jamaican women's team at the Winter Games in PyeongChang, Osborne and his side are forging their own path in the fast-paced, shortened form of the 15-man rugby game.

In November, his last-gasp try gave Jamaica the Rugby Americas North sevens title with a 28-24 win over Guyana in Mexico.

The victory meant Jamaica not only qualified for a place at the prestigious Hong Kong Sevens for the second year running, but also handed it a berth at the Commonwealth Games on Australia's Gold Coast -- where it will be in a pool with rugby-proud nations England, Australia and Samoa.

Jamaica has also secured a spot at the rugby sevens World Cup in San Francisco in July -- the first Caribbean team to qualify for any rugby World Cup.

'Mission Impossible'
Think of Jamaican sports and you begin with sprint legend Usain Bolt and and a sonic boom of world-class athletes. Then there's cricket and soccer. Rugby union is unlikely to register, and for good reason.

There are no rugby pitches on the island, and moves to grow the sport were initially met with inertia.

Recently there has been a reliance on the Jamaican diaspora. The UK, where kids can pick up a ball as early as they can run, has proved a more fruitful recruiting ground than the island.

Key figures are aware of the need to retain the essential Jamaican-ness of the group, but they know they must also capitalize on momentum.

Jamaican team manager Hughton Campbell, surveying a training session at Finchley rugby club in London, acknowledges the hard work that has gone into developing the team known as the "Crocs."

"To get this felt like mission impossible, really," he says.

Campbell joined the Crocs in 2016 at the behest of former Gloucester and Worcester Warriors winger Marcel Garvey, who coached alongside James Bailey, now the boss of England women's sevens.

To find new blood for the team, Campbell scoured the TV and the internet, as well as relying on a network of tipsters and mates of mates for recommendations.

Hand-outs from Bolt
One of Campbell's players is the thickset Tyronie Rowe, who was born in Jamaica.

Rowe knows tough -- he is from one of Kingston's roughest areas and has worked on and off as a mortician since he was 13. He splits his time between Kingston and England's Midlands, where he has played rugby league -- a 13-man variation of the game with different rules.

He has known what it's like to worry about where your next meal is coming from. He also saw a much younger Bolt handing out sports kit to Jamaican rugby players who had never seen such luxury.

Nodding to the busy session taking place in Finchley, Rowe says: "This is the easy bit."

The Jamaican story has been building for the last 18 months or so -- at all levels of the game.

New coach Marcus Blackburn, who previously looked after the Singapore sevens side, is instilling a new-found confidence.

Five of the boys training with the Jamaica youth team at Finchley are from English Premiership club academies, while Campbell is also keeping track of five Jamaica-qualified girls playing for a team in Harringay, north London.

"Where we are now was a dream," says Campbell. "But it keeps happening because we persevere.

"We have no budget, guys dig deep into their own pockets to help out, we do whatever we can. If I could show you what this looked like last year, it would be very different. So you say the Olympics in two years is an outside bet, I say lets give it a crack."

Major upsets
Wherever they go on their travels, Jamaica's players are fan favorites. After defeating Mexico in the semifinal of its own tournament, the home fans roared on the Crocs, singing Bob Marley's "One Love" as the Jamaicans ran out.

The plan is to win hearts and minds in the homeland.

He was nominated for the recent Athlete of the Year award on the island. Bolt has won it seven times, cricketer Chris Gayle is another previous winner. This year world champion hurdler Omar McLeod took the title.

But rugby and Osborne were also honored on the night.

After subsequently doing the rounds on the breakfast shows and sports channel chats, Osborne found people shouting "rugby man" at him on the street.

With a smile he reveals another admirer.

"The other day in Jamaica I actually met with Michael Frater who was an Olympic Gold medalist -- he was in the 4x100m, record-breaking team at London 2012 -- and he's interested in picking up rugby. I mean, USA sevens star Carlin Isles is fast, but is he gold-medal-at-the-Olympics fast?"

But the youngsters need convincing about rugby. Sustained performance could catch their eye. Jamaica has never won a match in Hong Kong, so that is goal one on April 6.

Seven days later, all eyes in Jamaica will be on the Commonwealth Games.

After that, Jamaica's UK-based players will compete on the invitational circuit, while the island boys will return home.

They'll come together again for the World Cup, which roars into life on July 20.

So how does Osborne see things panning out?

"Come July, we should be battle-hardened," he says.

"And hopefully the other teams won't pay too much attention. Your USAs and Englands will be thinking about each other, rather than what Jamaica are bringing.

"Hopefully that's when we come in as those sleeping giants, those underdogs, and maybe we can cause a couple of upsets. Upsets will again boost our profile."