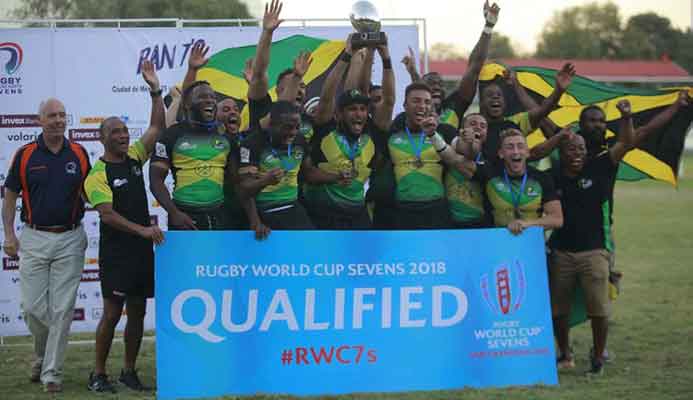 Jamaica and Mexico will compete at a Rugby World Cup Sevens tournament for the first time in the men’s and women’s competitions respectively after being crowned Rugby Americas North (RAN) Sevens champions.

Both sides had to dig deep to get a ticket to next year’s San Francisco showpiece, with Jamaica’s men needing a last-minute match-winner to see off the threat of pre-tournament favourites Guyana in the final, while the Mexican women overcame a loss in their second game to pull through.

In addition to playing at RWC Sevens 2018, the sides also qualified for the 2018 Central American and Caribbean Sports Organisation (CACSO) Games, Commonwealth Games and the HSBC World Rugby Sevens Series qualifier in Hong Kong next April.

Jamaica scored 61 points without conceding any in reply in wins over the Dominican Republic and Bermuda to top Pool B. Guyana and hosts Mexico finished top of the pile in the other two pools.

Having beaten the Cayman Islands in a two-point game in the quarter-finals, Jamaica ended Mexico’s hopes of a home final with a 26-12 win in the semis. Ultimately, Mexico had to settle for the bronze medal, after beating Trinidad and Tobago for the second time in the space of two days, while Jamaica met six-time holders Guyana for top honours.

It looked as though Guyana would be the team to make it to San Francisco, but Jamaica’s Conan Osborne ended their dream and sparked wild scenes of celebration among his own team when he crossed in the dying seconds to snatch an historic 28-24 victory.

ROSALES LEADS FROM THE FRONT FOR MEXICO

Buoyed by the passionate home support inside Campo Marte, hosts Mexico kicked off the round robin women’s competition with a 17-7 win over the Dominican Republic. But they were unable to back that up in their next game, a 26-14 loss to French Guyana, to leave their hopes of finishing first hanging in the balance.

However, further wins over Jamaica (22-7), Bermuda (34-0) and Guyana (17-12) meant the main prize was still at stake when they faced Trinidad and Tobago in a battle between the second and third seeds. They won the tensest of games, 5-0, thanks to a try from captain Dany Rosales.

“I am thrilled for the Mexican rugby community: the players, coaches, families and supporters that have helped us realise our dream. We have faced much adversity this year. This country and these players deserve this," said Mexico coach Robin MacDowell.

For Rosa Riivera, a seven-year veteran of the team, qualifying for RWC Sevens is “a dream come true.”

“It has been a pleasure to be part of this amazing project - the road to the World Cup. To get there, it is a dream come true. It has taken hard work, discipline, full commitment and passion for this beautiful sport, and we are now representing Mexico as one of the top 16 sides in the world.

“We are not only a team, we are a tight family chasing the same goal and making history for our country, all together.”

Second place in the women's competition went to French Guyana, followed by Jamaica and Trinidad and Tobago.