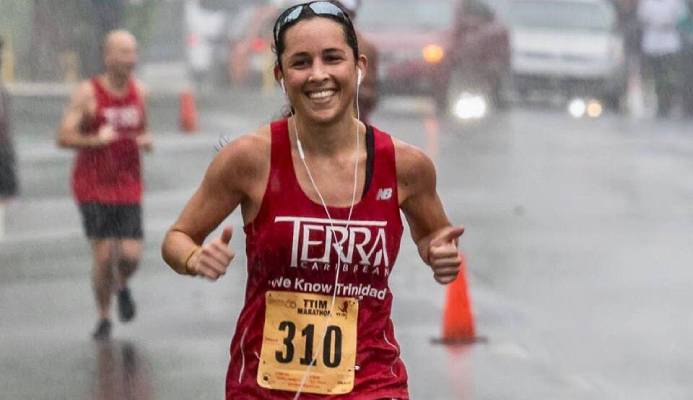 DEFENDING local women's champion Sjaelan Evans is injured but will still be hitting the road on Sunday morning for the TT International Marathon, as the temptation to compete was too hard to resist.

The 38th edition of the TT International Marathon will start at St Mary's Junction in Freeport at 5 am and end at Whitehall, Queen's Park Savannah, Port of Spain.

Evans, who is battling a knee injury, won the TT women's crown last year in three hours, 29 minutes and seven seconds (3:29:07). She was second overall among women, finishing behind American Grace Kahura in 2:53:50.

"I think I will run, I just don't know how it would go...I can't resist a marathon, the temptation is too great. I doubt I would be competing (for the title), I would probably just go out there and do whatever I can, run for fun, I guess. My goal would more be to just finish in one piece," she said in an interview on Friday.

Evans, 34, said she wants to participate at the Boston Marathon again when the 2020 edition runs off on April 20.

Evans, who won her first local women's title last year, prefers international marathons because the cool conditions are more conducive for fast times. "It is very hard to better your times in Trinidad because the weather is so hot and weather plays a huge part in it, so it is always easier to get a better time in international races." Evans has a personal best time of three hours and six minutes, achieved at the 2018 Boston Marathon.

Leah Kigen, a Mexico-based Kenyan, 40, and winner on five occasions in the TT marathon between 2013 and 2018, is excited to face the starter in the women's category. The other top women’s contenders are Colombian Palmenia Berrio and Kenyan Everline Atancha.

A new men's local champion will be crowned as defending local men’s champion Cantius Thomas retired from the sport after the 2019 edition, at age 52. Experienced TT runner Curtis Cox is back and coming off several successful training days. Kenyan-born Mexico-based Stephen Njoroge, the reigning men's overall champion, is eyeing a hat-trick of titles.

Stephen Tanui, the sixth place finisher in 2013, is coming back much stronger and hopes to show that at 37 he is still a contender.

Slow runners and walkers will start at 3.30 am and among these will be Jomo Pitt, Secretary of Sports and Youth Affairs, Tobago House of Assembly and president of the TT Olympic Committee Brian Lewis.

The Kiss 5K and the marathon relay will get the busy Marathon Festival of Events under way at the Queen's Park Savannah, Port of Spain on Saturday.

The 5K event will start at the corner of Dere Street and the Queen's Park Savannah at 4 pm with athletes completing one lap before finishing the race at Whitehall. There will be two water stops at Stollmeyer's Castle and at Jerningham Avenue.

The marathon relay, that starts at 6.30 pm, includes teams of five with each member running a lap of the 2.3-mile Queen's Park Savannah. The handover zone will be located at Whitehall. Runners are asked to follow instructions and remain in the zone when their leg is approaching and referees will be placed at points along the course to ensure teams complete the course.

The runners must use the inner lane around the Queen's Park Savannah and stay on the right of the road to ensure safety. There will be one water station at Jerningham Avenue, which is approximately halfway around the savannah. Approximately 50 teams are expected to participate in the schools, women's and open categories.