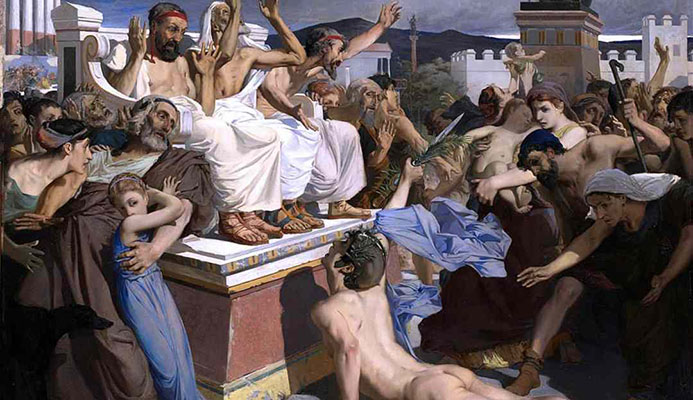 The answer is a weird story that starts in ancient Greece and finishes in front of Queen Alexandra in 1908. So, let’s get going . . .

The inspiration for the marathon as a running event dates back to a Greek myth from 490BC.

The popular myth goes that when the Greeks won the battle, they sent a messenger, Pheidippides, to Athens to deliver the good news. Pheidippides ran the entire 25 miles from Marathon to Athens. After he announced ‘Victory!’ to the awaiting Greeks, he collapsed of exhaustion and died soon thereafter.

A depiction of Phidippides, Luc-Olivier Merson, 1869

Several sources contest this accuracy of these events. But the myth was popularised and became one of the enduring, universally-known tales from Ancient Greece.

Alright, so the distance between Marathon and Athens is around 25 miles – depending on which route you take. But how did we arrive at 26.2 miles for the modern marathon distance? (or 26.219 miles if you’re being picky).

Let’s fast-forward from Ancient Greece to Athens in 1896.

The first modern Olympic games were being organized, to take place in Athens in 1896. The intention was to host the world’s best and strongest athletes in a global event, inspired by the ancient Greek Olympic contests held 2000 years earlier.

While devising the various athletic events, a French semantic professor called Michel Bréal proposed a running event which would recreate the mythical journey of Pheidippides. The Olympic planning committee loved the idea. They used the same route as the messenger had purportedly used 2400 years earlier, and decided to name the event after the town where it had all started: the marathon was born.

The first modern Olympic marathon was a success – 1st place went to Spyridon Louis, who completed the roughly 25 miles in 2hrs 58mins and 50 seconds.

The 1896 Olympic games of Athens was well received and became a fixture, popping up every four years in various major cities around the world. The marathon became a fixture of the Olympics, though at each event the marathon distance would vary slightly, always hovering around the 25-mile mark.

It wasn’t until the 1908 Olympics, hosted in London, that the 26.2-mile marathon distance was introduced.

The organizers had originally planned a 26-mile route, from Windsor Castle to the entrance of the White City Stadium. However, rumor has it that Queen Alexandra specifically asked that the marathon start in the gardens of Windsor Castle so the young royals could watch it, and finish in front of the royal box at White City Stadium. This added 385 yards, hence making the event 26.2 miles.

The first-ever 26.2-mile marathon was held on the final day of the 1908 London Olympics and saw some controversy at the finish line. Dorando Pietri of Italy entered the stadium first, but was clearly exhausted – he famously collapsed several times and ran in the wrong direction.

Dorando had to be helped along by two medics and successfully crossed the finish line first. However, several other competitors complained that he had been unfairly supported, so first place eventually went to American Johnny Hayes, who set a new Olympic record with 2 hours, 55 minutes and 18.4 seconds.

Dorando Pietri, crossing the finish line before being disqualified. From the 1908 London Olympics the first ever 26.2-mile marathon distance (Image: public domain)

The Olympic committee later decided that 26.2 miles should be the standard marathon distance for all events going forward.

Johnny Hayes’ victory led to a much bigger public awareness of marathons. The ‘Marathon Mania’ of the 20th century is well-known. Marathons are now held everywhere from the Falkland Islands to the Great Wall of China. Millions of regular people now taking up the 26.2-mile challenge, inspired by the Greek messenger.

For more on marathon length, check out my other post – How Long Is A Marathon?

NIGEL PAUL had a run for the first time on Tuesday and was pleasantly surprised at having maintained a high level of fitness, despite nearly…
in Amateur Boxing
Read More