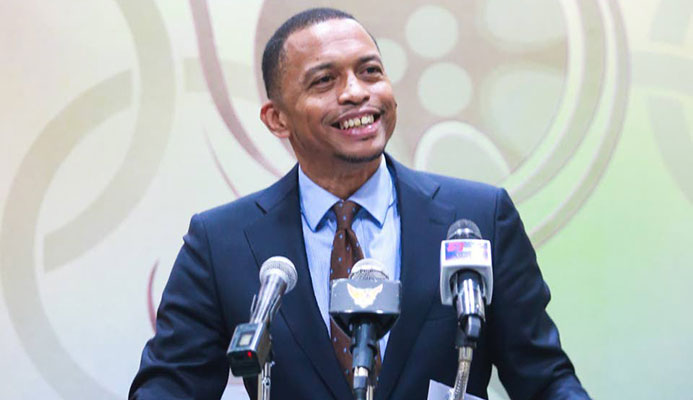 THE TT Olympic Committee (TTOC) will be hosting its second Advancing Women in Leadership forum tomorrow at the National Racquet Centre, Tacarigua. from 9am-4.30pm. And TTOC president Brian Lewis is calling for a woman to be elected president of the International Olympic Committee (IOC). Lewis made this point during the IOC’s Olympism in Action Forum – Women in Sport, on October 5 in Buenos Aires, Argentina.

Lewis, who has been stressing the Future is Female and been a strong advocate for women’s rights, is listed as one of the speakers for tomorrow’s forum. Other speakers include Sports Minister Shamfa Cudjoe, Pro League CEO Julia Baptiste, former TTOC executive member Catherine Forde, and national athletes Kwanieze John (rugby) and Cleopatra Borel (shot put).

Lewis, a guest speaker at the IOC’s Olympism in Action Forum in Argentina, made strong remarks as he pushed women’s rights on the front burner.

On equal pay for women in leadership roles, Lewis said, “While everything else is taking place, all the institutional efforts and the progressive leadership (in the IOC), I think there needs to be a better buy-in by the leaders of the NOCs. It requires a step-by-step approach and it also requires a revolution.

Lewis, who has been the TTOC president since 2013, noted, “There are many national Olympic committees that have never had a woman president. It’s time for 50-50 gender equality on NOC executives. The time is now.

“We need to have a sense of urgency and the current leaders who have a real commitment to gender equality need to stop paying lip service to it.”

The forum, which was moderated by Evelyn Watta of Kenya and featured fellow panellists Beth Brooke-Marciniak of the United States, Marisol Casado of Spain, and UN under-secretary-general Phumzile Mlambo-Ngcuka, discussed the challenges faced by women in sport, and explored how sport can be used as a tool for empowering women and girls, and for moving the needle towards gender parity.

Asked how he thinks gender equality has evolved over the years, both in business and in sport, Lewis responded, “Significant progress has been made over the years, in the case of the Olympic movement in sport.

“Why it is that, in the context of leadership and decision-making, we haven’t kept pace with modern progress? It’s still abysmally low and I think that’s where the real conversation needs to take place.”

On the issue of sports affecting the gender-equality landscape, Lewis commented, “Sports is (viewed) by everyone across the world, regardless of the gender and the geography, as a powerful tool, to make a powerful difference, in the lives of young people, children and society.

“Sports has taken on such a powerful cultural dimension in the world that essentially, where sports go, I think the world would follow.

“ We can’t be complacent. There are deep-rooted and deep-seated cultural dimensions that need to be challenged.”