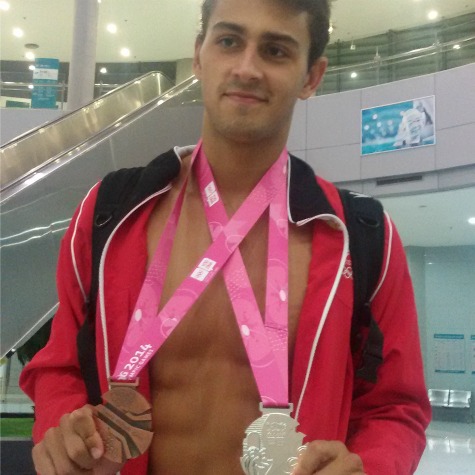 Trinidad and Tobago junior swimmer Dylan Carter closed off his Nanjing 2014 Youth Olympic Games campaign with his second medal  when he won silver in the Men's 50m butterfly. Carter sped to a new PR of 23.81 in a race he lead for 49 metres. After another great start, Carter held a quarter body length lead over China's  Hexin Yu, who won the Men's 50m free in world junior record time on Wednesday, at the 15 metre mark. However, Yu clawed back into the two-man contest with every stroke and was closing at the wall when Carter lunged for the finish.
Yu, who had 19 minutes earlier competed in the Men's 100m free semifinal and successfully advanced to tomorrow's final, timed his final stroke better and won in 23.69 seconds to Carter's 23.81. Carter's silver followed on his bronze from the day before in the Men's 50m free, his teammate Johnnya Ferdinand placed 30th in the Women's 50m free event in a time of 27.31. The swimmers including David Mc Leod have now concluded their competitive participation at YOG.

In Athletics, both Anduwelle Wright (Men's long jump-6.92metres) and Chelsea James (women's shot putt-15.15 m) finished in 9th place and will contest the B finals of their event Sunday.

In beach volleyball,  the T&T team of Chelsi Ward and Malika Davidson went under 2-0 to China (21-4, 21-14) and will have to defeat Bolivia tomorrow to advance to the round of 24.

In Sailing, TT's Abigail Affoo's progress was stymied again by the lack of wind as there were no races at Jinniu Lake yesterday. Weather permitting. Affoo will race  tomorrow.